The following is a review we recently received from an Air Head user:

Looking at the options for compost toilets that can be installed in a small space in a camper van (RVs to those in the USA), there are limited choices.

When discussing my views, most people said to me, “why don’t you just use a cassette loo like everyone else?”, but the reality is that I find they are very inconvenient for me (frequent and unpleasant emptying procedure), stink, and I’m really unsure about the chemical aspect to them. I say this as someone who has previously owned a caravan for many years, so it’s not what I just think, it’s what I know! I appreciate there are gadgets to make them less smelly etc, but essentially you have to empty them every few days and that’s not a pleasant experience. You also have to find a suitable place to empty them, which is fine if you’re on a camp site, but if you’re wild camping or roaming around, it’s not always so simple.

So if I wasn’t going to have a cassette toilet, then what were the options? Compost toilets came up on the radar and much research followed.

You can make a compost toilet yourself from parts, but that seemed to come with some compromises. There were some off-the-shelf toilets that looked nice (and cheap) but on closer inspection, were of dubious quality. There were some that looked nice, were well made but just a bit too large for my limited space. Some just used sawdust to cover everything (and apparently stop the smell), but I wasn’t sure I could entirely trust them in that respect. Then I saw the Air Head.

The Air Head has a big user base amongst RV’ers in the USA and generally gets great reports. OK, it’s not the prettiest thing, but you’re not buying it to stare at, and if it works well, then great!

I liked the Air Head because it was self-contained (had a container for liquids and one for solids) and I could quickly and easily empty the liquids bottle which was clipped onto the front. This is important because despite having several days storage capacity for urine, most users were saying they would empty the wee everyday or every other day. The container is not too large (and therefore not too heavy) and I found it can be discreetly carried to a quiet spot and emptied into the undergrowth, or down a toilet or elsan point if you’re near one. There’s also a seal (not a tight one) between the wee container and the top of the toilet – this means you can drive around with some wee in the container, knowing that it’s shouldn’t spill out if you hit a bump or make sudden stop.

The solids container has a ‘churning’ handle on the side which mixes my fresh deposits with the coir medium (coconut processing waste product) that is already in the base unit, and breaks it up. When I’ve had a dump, I turn the handle once or twice. I thought the turning handle would get in the way, but it’s set at a slight diagonal angle, so it doesn’t extend far into the space to the side.

There’s a plastic flap that covers the hole where the poo drops through – as you sit down, you can open it by pressing the lever on the side. After having used the Air Head, you realise that with the flap open you can’t really see inside because everything (coir and poo) is the same colour – although the loo paper is a bit of a giveaway! The main reason for closing the flap is that the manufacturer says men can stand to wee – something all other compost toilet makes (who use urine diverting bowls) don’t. In practice, you have to be slightly careful as I found some wee was getting in the bowl, but most was being directed by the flap to the front and into the wee bottle.

The fan vents through the floor of my van and connects to the Air Head with a flexible hose. This runs all the time and so far, has been 100% successful at removing all odours – it’s SO much better than a chemical toilet! At some point in the near future, the solids will need emptying, which is a bit more involved as the whole base of the Air Head is the solids container. According to the blurb, it should last 3-4 weeks for two people and 6-8 weeks for one, so we’ll see.

My initial thoughts are that yes, it’s expensive, but the freedom and ease of use it gives me is worth the investment, plus it’s incredibly well made and I’m sure it will last a long time. No flimsy plastic here! So far, there have been no odours at all and I’m really pleased with the performance of the Air Head. The supplied coir brick took ages to decompress with water, so that will need some advance planning as I come up to solids emptying day. The fan is a little louder than I would have liked – outside the toilet cubicle, you can barely hear it, but inside you know it’s there, but nowhere near as loud as a domestic bathroom fan. If it becomes an issue I’ll look at changing the fan for a quieter one as I believe they are pretty standard computer fans.

Having the Air Head compost toilet means I can go places away from the main sites. I’m in control and not worried about finding a place to empty a chemical toilet every few days. It’s been a great decision for me and my van.

Please note that the views above are those of a user and may not represent either WooWoo Waterless Toilets as the UK & Ireland distributor or Air Head as the manufacturer. Specifications and design can vary from time to time. 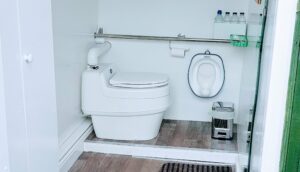 It’s a common problem on allotments – where do you go to the toilet if you’re caught short? Over the last decade or so, allotments 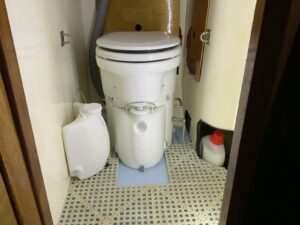 In June 2020, WooWoo delivered an Air Head to Amanda and Paul whilst they were docked for an extended period in Crete during the COVID-19 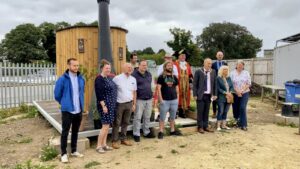 Impressive work by Rooted In Hull, an innovative urban farm, who decided to install one of our Kazuba KL2 waterless toilets in a rather creative

Not sure which toilet is right for you, need a quote or want to know a little more information?

Alternatively, you can write us an email at:

or give us a call on: